Here is the ornament of the day: 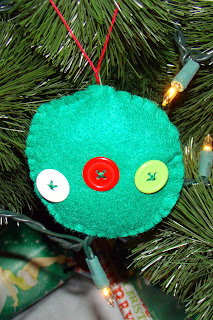 I was feeling all Felt-tastical after my cute little felt owl from yesterday. I had visions of felt ornaments dancing in my head. Anyway...I think this turned out kind of cute. The buttons kind-of creep me out, though. They remind me of those new dolls that are out with the button eyes. And those dolls creep me out because they make me think of the movie, Coraline. Which, I'll admit, was a great movie...but on the disturbing side.

SO! Now that I've talked myself through my button-phobia, back to the ornament! I just plopped down some green felt and I used the bottom of a mason jar to outline a circle. I cut out two circles and then placed one down to arrange the buttons, like so: 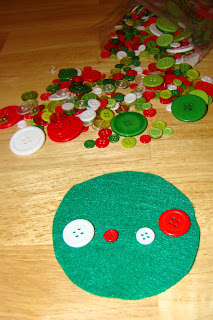 I played around for awhile and ended up liking the three buttons that are on the finished piece. I stitched the buttons on first and then whip-stitched the two pieces of felt together, stuffing the middle before I completely sealed them up. Then I added some string to hang it with! Very easy!

But...there is a dark side to this ornament...I actually made TWO, but one ended up getting scrapped. As I was whip-stitching away (I really DO need to practice that more) my eyes strayed over to my bottle of tacky glue. And I thought, "Hey! We used that stuff ALL the time back in Girl Scouts when we worked with felt!" So I tried to glue my other ornament together. Yeah. Didn't work! Roll Ornament Blooper Footage: 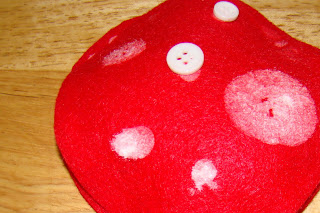 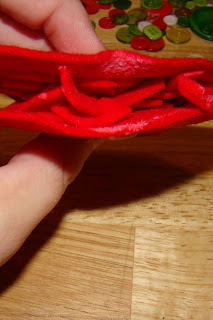 Everything seemed easier in Girl Scouts!!! But I DID rescue the buttons to use another day...
Posted by Amy at 8:29 PM