I'm finding that if I don't blog everyday, it's so easy to push it off until "tomorrow" and then (like today) I found that I haven't blogged for days! So my goal is to have a post every day this week...even if it's one of those cute "Wordless" ones where I just share the kidlets being crazy!
And Happy President's Day!!! It's an unsung Holiday (except for some awesome store sales!) that I never paid much attention to until having kids. It's a pleasing surprise to see how much my kids are learning at school about George Washington and Abraham Lincoln, and many other Presidents, as well.
John's pre-school did a Lincoln unit and they even made a log cabin that is big enough for the kids to go inside and sit and read. They also crafted five dollar bills (early intro to counterfeiting???) and had a "store" where the kids were able﻿ to buy little flags. So cute!
So...because I'm lazy...I didn't have any special activities for our kids today (they both have the day off of school) that involve the Presidency. But I've got a GREEN activity. And...um...lots of Presidents are on money...and...um...money is GREEN! don't judge me.
There is this marvelous blog I found, Daily Pleasures, written by this wonderful woman, Amy. Reading her blog makes me feel peaceful. Really, you should check her out. I found the "recipe" for Flubber here, on her blog...and after viewing the photos of her kids with the stuff...who wouldn't want to make it?!?!
I quartered the recipe, because of an Elmer's shortage we have going on in our house! But it worked just great. Kat was sleeping, so she didn't get in on the fun. John touched the stuff with a pinky finger tip, screamed and washed his hands for about five straight minutes. Louie was my trouper, though, so I present to you...Louie & Flubber! 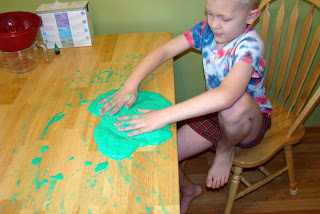 Louie is kneading the stuff together. It was at this time when I wondered if it would stain the table! It didn't.
﻿ 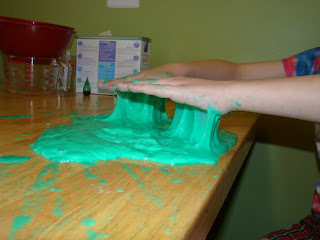 AWESOME!!! I'll admit there are few photos of the fun, because I was having lots of fun myself!﻿ 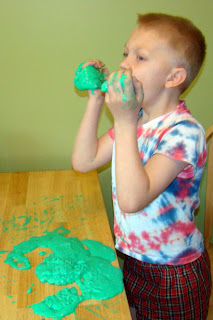 AAAAHHH-CHHHHHOOOO! Anything snot/booger related is hilarious to a 7-year-old. It's good to know that some things never change!
ps....Please pay no attention to my son's pairing of tie-dye with plaid. That is just the way he rolls! 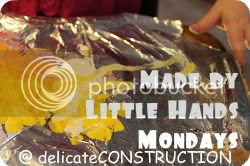 Thanks so much for linking up to Made by Little Hands Mondays! I love this activity! The bigger the mess the bigger the fun! (Even if my husband doesn't think so lol)