A few months ago we celebrated Middle One's 4th Birthday.
He is a Pixar Cars nut, Cars 2 being the first movie he was able to go to the theater to see! So, of course, he wanted a Cars Party!

If you're doing Cars...you HAVE to include McQueen & his best bud Mater.
My first project was making fork & spoon holders after being inspired by Simply Crafty! 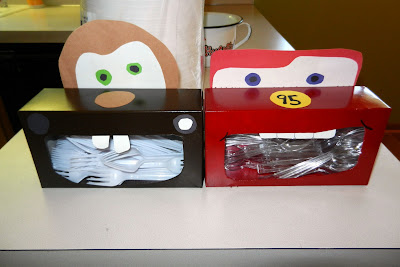 Mater & McQueen are empty tissue boxes. I cut out the tissue opening to look like their mouths were open. Then I spray painted Mater brown and McQueen red. Everything else is cut from construction paper! I used the tissue boxes as a guide for how wide to cut out their eyes. Mater has one working and one broken headlight. And McQueen has his racing number on his nose (?), and I cut out yellow lightening bolts for each side. These were a huge hit! Now they're on John's dresser and hold all his treasures! 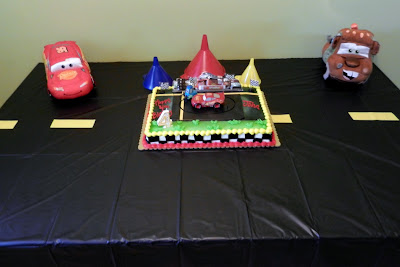 Here's a shot of the cake table. I make the kid's cakes 90% of the time. John's birthday fell in the middle of the busiest and craziest month we've ever had! So I sucked it up and bought one! He already owned the character pillows (Disney Store on our trip to Branson in 2010). I bought the funnels from the auto section in Wal-Mart. 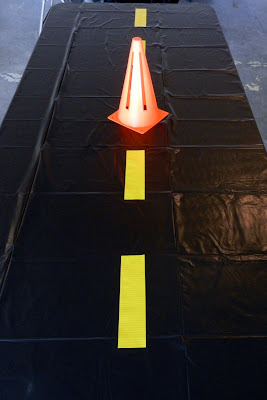 And here's what the tables looked like! I also got this idea from Simply Crafty and I used it on the guest tables and the cake table. It's as easy as putting down a black plastic table cloth and then running yellow duct tape down the center. Instant Road! And each table got a cone in the middle!

I was pretty pleased with how fun everything looked, with fairly little effort!!! John was thrilled...and his smile is the best decoration EVER!

That's something any little boy would just love. I know mine would. Thanks for sharing.

That's so cute and clever. I just had two little boy birthdays to throw myself. It can be challenging when things are busy and hectic. Sounds like you came up with the perfect theme for yours!

What kind of spray paint did you use? I'm looking to spray paint tissue boxes and I am cautious of what kind to buy, I don't want the paint to disfigure the box. Thanks!

Hello, Michelle! For the boxes, I used Krylon ColorMaster Enamel Spray Paint. It had a tendency to drip, so I sprayed very lightly and did multiple coats.