As I mentioned in my last post we decided to let Louie celebrate his 7th Birthday with only a few friends. We were supposed to have his party at the park with a few organized activities, pizza for dinner and the rest of the time spent running and climbing on the park equipment. Wind, rain & ridiculously cold May temps had us re-plan and have the party at our house instead! So I had to come up with a few quick ideas to keep six 7-year-old boys entertained!

As the boys came we let them just run around and play. Louie gave them the grand tour of his room and introduced everyone to Hammy the Hamster. When everyone was here we sat down and had pizza for dinner. I had two party games planned and let the boys vote on which one to do first.

The "Human Knot" won. I remember playing this in grade school. The boys sat in a circle and then reached into the center. Everyone grabbed someone else's hand. Then we "cut" the string in one place and the boys had to un-tangle themselves to form a line. Here they are in the midst of un-tangling. 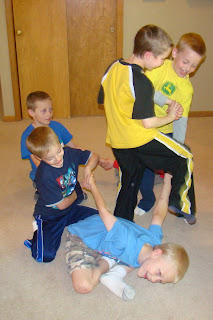 The other game was "Pin the Saber on the Jedi". I got the idea for this game here. This is a poster from Louie's room. I made these (highly unrealistic) light sabers out of construction paper. We blindfolded the boys and had them sticky tack their saber to the poster. Not bad! 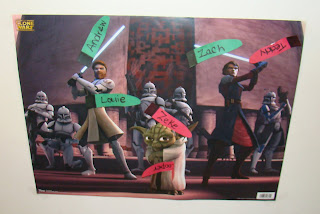 Then we had them sit down and to the Marshmallow Shooter craft that I detailed in my previous post. The boys LOVED creating their own versions. They sat still and quietly working for almost half an hour! Then they raced downstairs to attack our wall with marshmallows! 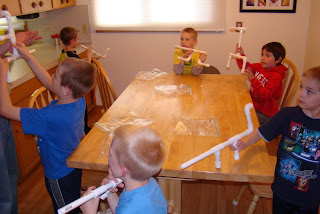 Next it was cake time! If you couldn't already tell, Louie is a Star Wars fan. His "cake" was a light saber made up of cupcakes. I got the idea here . 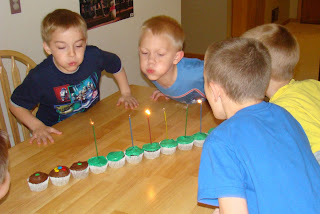 We did presents and then wrapped up with a Darth Vader Pinata. We found the kind with strings and the anticipation the boys had each time someone pulled the string was hilarious. This way the pinata wasn't ruined and Louie has a Vader hanging above his bed. 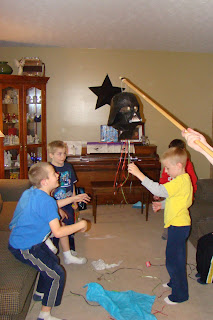 So even though we were excited about having a Park Party, the boys had a fun time. Their excitement level and energy was great to see! Louie told us it was his "best birthday EVER!" And, "I knew, Mom. I knew that being seven would be awesome."